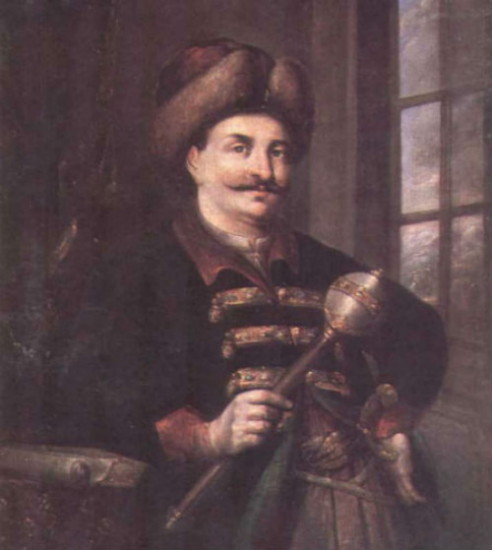 Khanenko, Mykhailo [Xanenko, Myxajlo], ca 1620–80. Hetman of Right-Bank Ukraine from 1669/70 to 1674. As colonel of the Uman regiment in 1656–60 and 1664–9, he supported the pro-Polish orientation of hetmans Yurii Khmelnytsky and Pavlo Teteria. In 1668 he sided with the faction of the Zaporozhian Cossacks who, with Crimean Tatar support, opposed the authority of Hetman Petro Doroshenko in Right-Bank Ukraine and tried to replace him with Petro Sukhovii. In July 1669, after Sukhovii was decisively defeated by Doroshenko, Khanenko was proclaimed hetman at a council of three Right-Bank regiments in Uman. Continuing the struggle against Doroshenko, he was defeated in battle at Stebliv on 29 October 1669. On 2 September 1670 Khanenko's envoys concluded a treaty with the Poles at Ostroh in which Khanenko received Polish recognition and military aid, after agreeing to swear fealty to the Polish king, to limit his rule only to a small part of the Right Bank, and to extend autonomy only to the Cossack stratum. Khanenko lost several more battles in his war with Doroshenko. In 1674, after the forces of the Moscow-supported hetman of Left-Bank Ukraine, Ivan Samoilovych, crossed the Dnipro River to fight Doroshenko and were joined by most of the Right-Bank regiments, Khanenko relinquished his power to Samoilovych in exchange for estates in Left-Bank Ukraine. Later he was accused of conducting secret talks with the Poles in 1677–8, and the tsar ordered Samoilovych to imprison Khanenko in Baturyn. Khanenko succeeded in establishing his innocence, but he died shortly after.

List of related links from Encyclopedia of Ukraine pointing to Khanenko, Mykhailo entry: