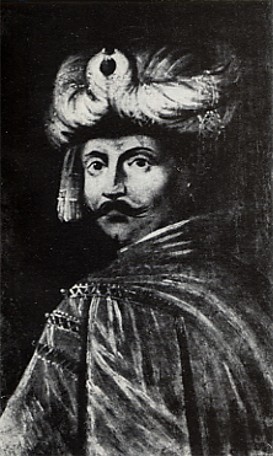 Khmelnytsky, Tymish [Хмельницький, Тиміш; Xmel’nyc’kyj, Tymiš], b 1632, d 15 September 1653. The eldest son of Bohdan Khmelnytsky; brother of Yurii Khmelnytsky. In February–March 1648, his father left him as a hostage with the Crimean khan, Islam-Girei III, to guarantee their alliance. Later, as captain of Chyhyryn company, he distinguished himself as a capable commander in the Cossack-Polish War. In 1650 he led a large Cossack-Tatar army against Moldavia, forcing the hospodar of Moldavia, Vasile Lupu, to abandon his co-operation with the Poles and form an alliance with the Cossacks instead. To strengthen this alliance, Lupu promised his daughter, Roksana Lupu, in marriage to Khmelnytsky, who led (in 1652) another army into Moldavia and married Roksana. During this campaign his army participated in the Battle of Batih, where the Cossacks scored a decisive victory over the Poles. These developments made Moldavia's neighbors uneasy; Prince György II Rákóczi of Transylvania and hospodar Matei Basarab of Wallachia, fearing the growth of Cossack influence in the region, supported a revolt by Moldavian boyars against Lupu. Khmelnytsky led another Cossack army to Lupu's defense. In May 1653, after early victories at Iaşi and Focśani, his army was defeated at Finta (17 May). That autumn Khmelnytsky came a second time to help his father-in-law; however, this time he was killed in the Battle of Suceava. His death ended his father's attempts to develop a Cossack-Moldavian alliance as the cornerstone of his foreign policy.

List of related links from Encyclopedia of Ukraine pointing to Khmelnytsky, Tymish entry: