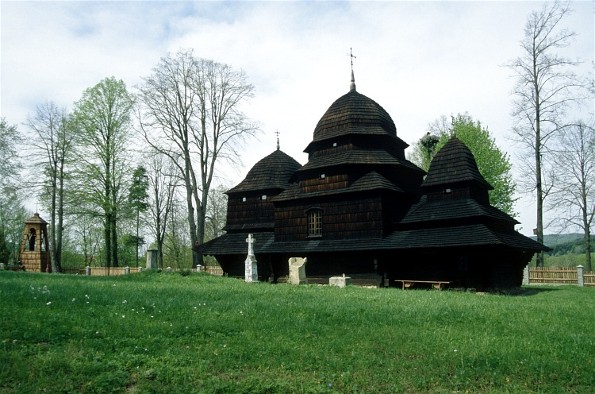 Folk architecture (народна архітектура; narodna arkhitektura) A system of construction techniques and architectural forms used in Ukraine, based on centuries of experience. Folk architecture was the work of master carpenters and masons and sometimes of ordinary peasants.

In the past the basic building material in the forest belt was lumber, and in the steppe belt, clay. In the forest-steppe belt both lumber and clay were available. Stone and brick were rarely used before the 20th century (they were used particularly in the 1930s). Clay houses were common in the steppe regions of Ukraine and northwestern Caucasia; they reached as far west as Podilia. The main building material was unfired clay mixed with cut straw or cylindrical forms (valky); lumber was used only for the frame of the ceiling and roof and for door and window frames. In the forest-steppe belt so-called turluchni houses were common. They consisted of a wooden frame with walls made of woven willow branches, twigs, or reeds. A layer of clay was then applied to this structure on the inside and the outside. When the clay was dry, it was whitewashed with a lime mixture. Wooden houses were built in the forest belt in the north and west, in the Carpathian Mountains and Subcarpathia. The walls were built of posts driven into the ground or of thick, long logs. Then spikes were usually driven into the walls in preparation for plastering, and the walls were covered with plaster. This method of finishing the walls was not used in northern Polisia (where the houses are reminiscent of the Belarusian and Russian types), the northern Chernihiv region, or the Carpathian Mountains. The plastering was done not for utilitarian, but for traditional-esthetic, reasons.

Statistical data published in 1924 show that 50 percent of surveyed houses in the Ukrainian SSR were built of wood (posts or logs), 33 percent, of clay, and the rest, of stone and brick.

The floor plan of houses is similar all over Ukraine. The archaic one-room house was no longer in evidence by the 1920s; the two-room house also became obsolete and could be found only in some areas of the Carpathian Mountains. Houses consisted usually of three parts: a central hallway (siny), entered from the outside and leading into the living quarters (svitlytsia) on one side and the storage room (komora) on the other side. The storage room, unlike the rest of the house, was not always plastered on the outside. This basic plan originated in the distant past. It is common to all parts of Ukraine regardless of materials, economic conditions, or foreign influences. It differs markedly from the typical Russian house.

The roof rests on joists attached to rafters. In the steppe and forest-steppe belts the roof could be thatched with bundles of straw or reeds. The roofs in Right-Bank Ukraine differed from those in Left-Bank Ukraine by having roof poles and bunches, rather than sheaves, of straw. In forested or mountainous areas the roofs were covered with thin boards or shingles. The roofs usually had four sloping sides, but in recent times the two-sided roof (which gave a higher loft) with a window has become popular.

In all regions of Ukraine houses were encompassed on the outside by a ridge of pressed clay known as the pryzba. In some areas, particularly in the steppe belt and the Poltava region, the houses could have an outside porch. All houses of the Hutsuls and most houses of the Boikos had a narrow gallery along the front wall. The houses were surrounded with green orchards and flower gardens, which set them clearly apart from the dark cottages (izby) of the Russian peasants.

The doors in Ukrainian peasant houses were made of solid wood and were hung on iron hinges. Usually they were rectangular in shape, but one can still find the rarer and older hexagonal door with the upper corners cut off. The door and window frames were sometimes ornamented with wood carvings of a geometric pattern. The threshold, particularly in the west, was quite high. The doors were secured with wooden locks.

Usually Ukrainian houses had three windows—two in the front and one on the side. There was also a small window high above the stove, which was always to the right of the entrance from the hall into the living quarters. At first the windows were made of ox bladder and then of glass.

The arrangement in the living section of a peasant house was the same throughout Ukraine: to the right of the entrance stood the clay stove (pich) with a planked sleeping extension (prypichok) and clothes pegs on the wall and a cradle. To the left was a hanging shelf for dishes (mysnyk), and in the corner opposite the stove was a table with fixed benches along the walls. Over the table in the place of honor (pokutia) hung the icons, which were often decorated with embroidered towels (see Rushnyk). Clothes were stored in a chest, which was often painted with flowers.

The stove was built of clay or brick and, in the mountains, of stone. In the Hutsul region stoves were often covered with tiles. Painted ornaments on the stove were characteristic of Ukrainian houses. In the 19th century flues, which were built in the halls, became common, and ‘smoky’ houses (which were also called ‘black’) became obsolete. A few black houses could still be found at the beginning of the 20th century in the Carpathian Mountains and Polisia. The ceiling was constructed of wood. The svolok or beam on which the dates of important family events were carved or written is characteristic of the Ukrainian folk cottage. The floor was usually the earth, covered with clay. Only the richer peasants had plank floors.

The houses were whitewashed on the inside and outside. Sometimes they were painted a pale blue.

The homestead. The layout of the homestead varied in Ukraine. In the Hutsul region the house was joined with the farm buildings under one roof, forming a kind of fortress surrounded by a high fence with a narrow roof. This complex was called grazhda. Among the Boikos and somewhat less frequently among the Lemkos the house and the farm buildings were under one roof, but were arranged in a row rather than a square as among the Hutsuls. Enclosed homesteads were also found in Volhynia, Polisia, and the Chernihiv region and Kursk region. Fenced yards are typical of Ukrainian territories. Fences were usually wattled (tyn, plit). In forested areas they were wooden (parkan). In the steppe they often consisted of a ditch or mound planted with thorns or bushes (zhyvoplit). The gate was built of logs or boards.

The farmhouse and buildings constituted the homestead (sadyba, obistia). The number of buildings and type of construction depended on the owner’s means. The main buildings were the stable for horses and cattle, the barn (stodola, klunia) for threshing and storage, the grain-storage house (komora), the pig sty (khliv), the chicken house (kurnyk), and the shed (shopa) for farm implements, wagons, sleighs, and so on. The well, with its counterpoised lever (zhuravel), had also a partly decorative function.

The houses and homesteads of non-peasants (eg, parsonages) differed little, apart from size, from the average house or homestead of the region. The church was an important part of a village’s architecture. Windmills and water mills (built mainly in the mountains) were included in the class of farm buildings.

Changes in the Soviet period. Peasant houses were built according to the traditional pattern until the 1930s, when the collectivization drive brought great changes in house building. The elimination of family farms led to the disappearance of such buildings as the stable, storage house, and barn. Families were provided only with houses and small sheds. At the same time, however, new communal buildings and clubs made their appearance. Although traditional houses were still built, the modern rectangular house, with a hall, a pantry, a kitchen, and a large room, divided by the built-in stove into a bedroom and living room, became more and more common. The new houses were painstakingly decorated. Large work centers were built to accommodate the farm work of the state farms or collective farms. They were often located at the outskirts of the village and separated from the living quarters of the collective-farm members. These buildings included stables, sties, chicken houses, garages, silos, workshops, mills, and bakeries. They were built according to standard plans out of new building materials such as cement and blocks.

After the Second World War, according to the decree of the Council of Ministers of the Ukrainian SSR and the Central Committee of the Communist Party of Ukraine On the Construction of Farmers’ Housing, Farm and Cultural Buildings in the Country (2 April 1945), all farm construction was to take place according to previously approved plans. According to Soviet statistics, 750,000 standard buildings were built in the villages of Ukraine in the first three years after the war. Model building complexes were constructed, such as the village of Demydiv in the Kyiv region with 900 residential homes of wood frame faced with brick. In the 1950s agrotowns (see Agrotown) were started in a few places, but were later abandoned. They consisted of standard two-story buildings that contained two to four apartments, schools, kindergartens, and other facilities. Attention was given to greenery and parks. Alongside officially propagated architecture, private construction of traditional Ukrainian houses took place in agrotowns and workers' settlements.

Except in the western regions, Ukraine’s village landscape has largely changed. Most churches and belfries have disappeared, and the villages are dominated by administrative buildings, schools, clubs, cafeterias, and the like.

List of related links from Encyclopedia of Ukraine pointing to Folk architecture entry: