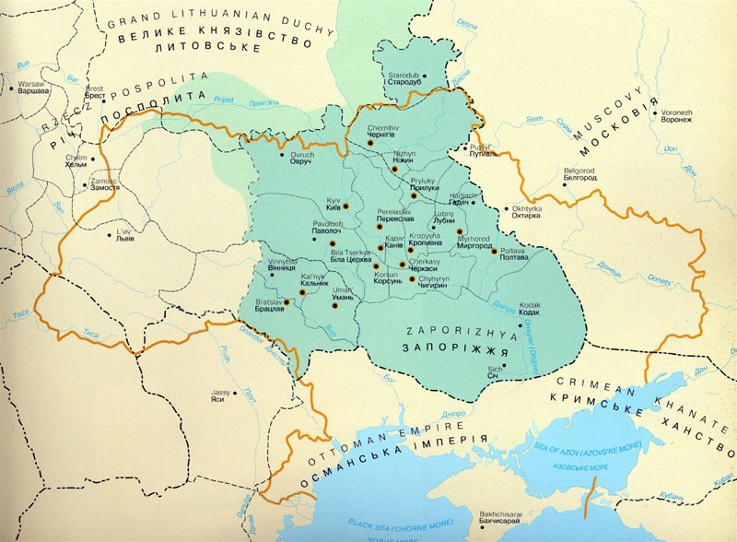 Hetman state or Hetmanate (Hetmanshchyna). (Maps: Hetman state ca 1650; Hetman state ca 1750.) The name of the Ukrainian Cossack state, which existed from 1648 to 1782. It came into existence as a result of the Cossack-Polish War and the alliance of the registered Cossacks with the Cossacks of the Zaporozhian Sich and other segments of the Ukrainian populace. The territory of the state at the time of its first hetman, Bohdan Khmelnytsky (1648–57), consisted of most of central Ukraine, ie, the territory of the former Kyiv voivodeship, Bratslav voivodeship, Chernihiv voivodeship, and part of Volhynia voivodeship, as well as part of Belarus (see Belarusian regiment). In 1663 the Hetman state in Right-Bank Ukraine came under Polish domination, while Left-Bank Ukraine came under Muscovite control. A period of civil war ensued (see Ruin) as various Left- and Right-Bank hetmans (particularly Petro Doroshenko, Yurii Khmelnytsky, and Ivan Samoilovych), backed by their respective supporters, attempted to re-establish a unitary state. Despite these efforts, the partition of the Hetmanate was confirmed by the Muscovite-Polish Treaty of Andrusovo (1667) and the Eternal Peace of 1686. When the Cossacks were abolished by Poland in 1700 on the Right Bank, the Hetmanate was left with only the lands of the Left Bank—Chernihiv voivodeship (together with the Starodub region) and the part of Kyiv voivodeship to the east of the Dnipro River. The capitals of the Hetman state were Chyhyryn (1648–63), Hadiach (1663–8), Baturyn (1669–1708 and 1750–64), and Hlukhiv (1708–34). From 1654 the Hetman state was nominally a vassal of Muscovy (see Pereiaslav Treaty of 1654). The political relationship between the two countries was renegotiated with the election of each new hetman (see Hetman articles), which led to the steady erosion of the Hetmanate's sovereignty.

The Hetman state exhibited elements of both republican and monarchic types of government. Because it did not have a constitution that defined the powers and prerogatives of its various institutions, these changed over time as a result of internal conflicts and the encroachments of the Russian government. The highest ruling organs were three bodies with somewhat overlapping functions: the General Military Council, the hetman, and the Council of Officers. The General Military Council was the institution of direct government in the 17th century and represented in theory the supreme will of the dominant group in society, the Cossacks. The hetman, meanwhile, was the head of state, commander in chief of the Cossack army, and head of the entire administrative, judicial, and military apparatus. Some hetmans recognized the ultimate authority of the military councils, while others, such as Bohdan Khmelnytsky and particularly Ivan Samoilovych and Ivan Mazepa, opposed it. During the reign of these hetmans, the state most resembled a monarchy with the election for life of the monarch-hetman. The Council of Officers was a semiformal advisory body that met twice a year; with time it acquired the characteristics of an estate parliament for the Cossack starshyna. Other central institutions included the General Military Chancellery, which executed the hetman's orders, and the General Officer Staff, which functioned as the hetman's cabinet. At first this body was elected by the Council of Officers, but later it was appointed by the hetman himself, or, as the state lost its autonomy, by the Russian government. The General Military Court, presided over by the hetman, was the supreme court of appeal.

At the local level the state was organized, on the basis of the Cossack military organization, into regiments (see Regimental system) and companies (see Company system). In Bohdan Khmelnytsky's time, there were 10 Right-Bank Ukraine and 7 Left-Bank Ukraine regiments; later there were 10 regiments in total. The regimental and company administrations mirrored that of the central government: each regiment had a military council, colonel, and regimental council of officers, and each company a captain and council of officers. At first most officers at the local as well as central levels of administration and the judiciary were elected. Later, however, this practice declined and individuals were appointed by higher authorities or the Russian government.

The Hetmanate, particularly in the 18th century, had a social hierarchy, where an individual's political power, legal rights, and social status were determined by his membership in a particular social group or estate (see Estates). At the top of the pyramid were the senior Cossack officers (the Cossack starshyna and the notable military fellows), followed by the Cossacks, the burghers and other town dwellers, and the peasants. At first, after the Khmelnytsky uprising, the state was in principle composed of free citizens, although some of the peasantry (particularly the church peasants) remained in a state of servitude. With time, however, as their obligations grew heavier, the rest of the peasantry and the rank-and-file Cossacks became impoverished, and the Hetman state became an increasingly regimented class society in which only the officer class had special privileges. Town dwellers also began to lose their political autonomy, although large cities and towns continued to be ruled under Magdeburg law. At the same time class barriers were created: eg, it was forbidden for a peasant to become a Cossack. The legal system of the state was derived from a variety of sources, particularly the 1648 Polish edition of the Lithuanian Statute (see Code of Laws of 1743).

In the 18th century, the increasing political control of the Hetman state by Russia precluded the independent evolution of its administrative, financial, and judicial institutions. During the reign of Catherine II (1762–96) Ukrainian autonomy was progressively destroyed. After several earlier attempts, the office of hetman was finally abolished by the Russian government in 1764, and his functions were assumed by the Little Russian Collegium. In 1782 the regiments were replaced by vicegerencies, and Russian political and administrative institutions and practices replaced the unique institutions of the Hetmanate. At the same time the social structure of the state was recast: serfdom was introduced, the Cossacks lost what remained of their special status, and the Cossack starshyna was at least partially integrated into the Russian nobility.

List of related links from Encyclopedia of Ukraine pointing to Hetman state entry:

A referral to this page is found in 341 entries.