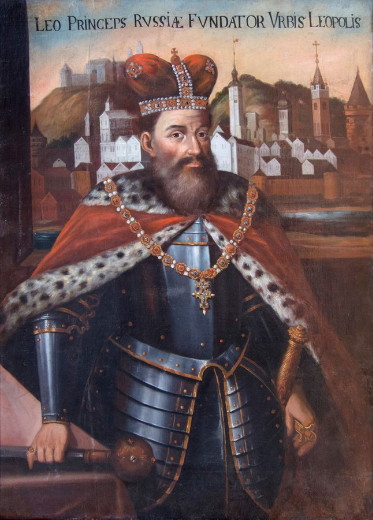 Lev Danylovych [Лев Данилович; Lev Danylovyč], b ca 1228, d ca 1301. Prince of Peremyshl (1240–69), Belz (1245–69), and Galicia (1264–1301) of the Romanovych dynasty; son of King Danylo Romanovych, brother of Roman Danylovych, Mstyslav Danylovych, and Shvarno Danylovych, and father of Yurii Lvovych. He had dynastic ties with Hungary through his marriage to Konstancia, the daughter of King Béla IV. Lev inherited the Halych principality as well as the Peremyshl and Belz lands from his father in 1264 and became the most powerful ruler of the Romanovych dynasty. In 1268 he murdered the Lithuanian prince Vaišvilkas after Vaišvilkas abdicated and gave Lithuania to his son-in-law, Shvarno Danylovych, instead of to Lev. As a result Lev spoiled the plans for the unification of Galicia-Volhynia and Lithuania under the rule of a prince from a Rus’ dynasty. Lev inherited the Kholm land (see Kholm region) and Dorohychyn land after Shvarno’s death ca 1269. He made Lviv (which was named after Lev) his capital in 1272. A vassal of the Tatars from the early 1270s, he had their support during his campaigns against Lithuania (1275, 1277), Poland (1280, 1283, 1286–8), and Hungary (1285). He made a pact with Wenceslas II of Bohemia in 1279 and, as his ally, tried unsuccessfully to seize Cracow in 1280. Lev’s long war with Poland brought little gain. He annexed to his realm part of Transcarpathia (including Mukachevo) ca 1280 and part of the Lublin land ca 1292. Lev Danylovych gained a general reputation as a brave military commander, but a rather short-sighted and impulsive politician.

List of related links from Encyclopedia of Ukraine pointing to Lev Danylovych entry: