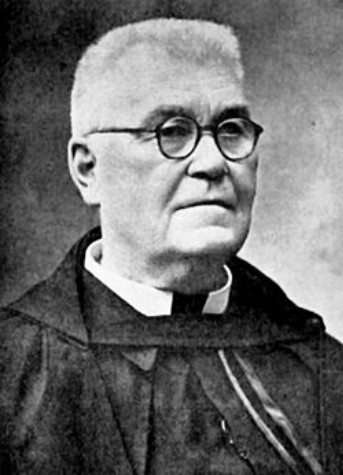 Halushchynsky, Tyt Teodosii [Галущинський, Тит Теодосій; Haluščyns’kyj], b 13 April 1880 in Buchach, Galicia, d 31 August 1952 in Mundare, Alberta, Canada. Priest, biblical scholar, and church historian; brother of Mykhailo Halushchynsky. After studying philosophy and theology at Lviv University and the universities of Fribourg, Vienna (D Th, 1906), and Innsbruck, he taught at the Stanyslaviv Theological Seminary. He took monastic vows in 1908 and was appointed lecturer at Lviv University (1915) and at the Greek Catholic Theological Seminary in Lviv (1920), where he also served as rector (1920–5). He was a founding member and president (1923–6) of the Ukrainian Theological Scholarly Society. In 1931 he became the spiritual adviser at Saint Josaphat's Ukrainian Pontifical College in Rome. In 1949 he was elected archimandrite of the Basilian monastic order and appointed consultator to the Congregation for Eastern Churches. Besides numerous articles on public affairs, philosophy, and theology, Halushchynsky wrote Istoriia bibliina Staroho Zavita (Biblical History of the Old Testament, 3 vols, 1914–34) and De urbis Babel exordiis ac de primo in terra Sinear regno (1917), and edited Acta Innocentii pp. III (1198–1216) A Registris Vaticanis (1944).