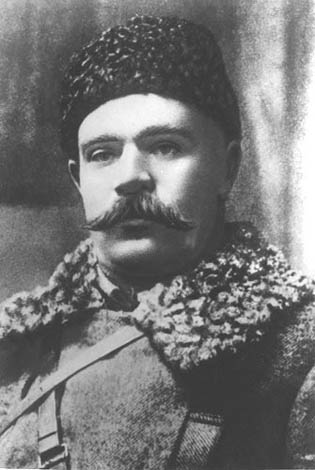 Parkhomenko, Oleksander [Пархоменко, Олександер; Parxomenko], b 24 December 1886 in Makariv Yar, Slovianoserbsk county, Katerynoslav gubernia, d 3 January 1921 in Buzivka, Uman county, Kyiv gubernia. Bolshevik revolutionary and military figure. From 1904 he was active in the Bolshevik party in the Donets Basin. After the February Revolution of 1917 he helped organize the Red Guard in Luhansk. As commander of the Luhansk Red Army detachment (1918–19) he fought the White Volunteer Army, the Army of the Ukrainian National Republic, and German forces in eastern Ukraine and the Don region. In January 1919 he was appointed military commissar of Kharkiv gubernia; in December 1919, special official of the Revolutionary Military Soviet of the First Cavalry Army; and in April 1920, commander of its 14th Division in Volhynia, Galicia, and Southern Ukraine. He was killed in combat with Nestor Makhno’s forces. Petro Panch and V. Ivanov have written novels, and L. Lukov has made a film, about him. Dmytro Myshko (1957), V. Sheludchenko (1956), and G. Tolokolnikov (1962) have published biographies of him.

List of related links from Encyclopedia of Ukraine pointing to Parkhomenko, Oleksander entry: