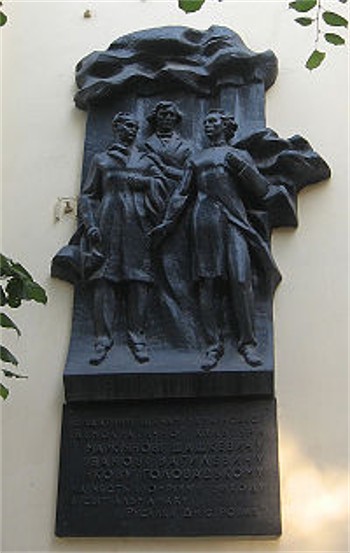 Ruthenian Triad (Ruska triitsia). A Galician literary group named after the number of the predominant members, Markiian Shashkevych, Yakiv Holovatsky, and Ivan Vahylevych, which existed in the late 1830s, while the three were students at the Greek Catholic Theological Seminary in Lviv. Since the group came into being during the period of romanticism, it retained the predominant interests and features of that movement—an interest in folklore and history and a striving for Pan-Slavic unity. Its Slavophilism was noticeable in the use of Old Slavic pseudonyms: Ruslan by Shashkevych, Dalibor by Vahylevych, and Yaroslav by Holovatsky. The group united around itself other youths who were burning with a desire to work for the good of their people. Some of them (Hryhorii Ilkevych, M. Kulchytsky) were also involved in Polish revolutionary circles; most, however, were engaged in collecting folk oral literature, studying the history of Ukraine, translating the works of other Slavic authors, and writing their own verses and treatises. The members of the group maintained that the ‘Ruthenians’ of Galicia, Bukovyna, and Transcarpathia were all part of one Ukrainian people who had their own language, culture, and history. They emulated the Ukrainians under Russian rule, and were especially influenced by Ivan Kotliarevsky's Eneïda (Aeneid, 1789, 1809, 1820s), the collections of folk songs by Mykhailo Maksymovych and Izmail Sreznevsky, the grammar of Oleksii Pavlovsky, and some of the early works of the Kharkiv Romantic School. They made several attempts at publishing their own works. Their first two collections, ‘Syn Rusi’ [The Son of Rus’, 1833] and ‘Zoria’ [The Star, 1834]), were not published. Their third collection, Rusalka Dnistrovaia (The Dnister Nymph, 1836), was published in Budapest, but 800 of the original 1,000 copies printed were immediately confiscated. Although the collection was short-lived, its importance was immense, in that it was written in the spoken Ukrainian and not in the ‘learned’ yazychiie; it thus initiated the use of vernacular Ukrainian language for literature in the Ukrainian lands in the Habsburg Empire. The Pan-Slavic sentiment in the miscellany makes it similar to the Slovak poet Jan Kollár's collection of sonnets Slávy dcera ([Goddess] Slava's Daughter, 1824), which was to a great degree the inspiration for the Ruthenian Triad.

List of related links from Encyclopedia of Ukraine pointing to Ruthenian Triad entry: