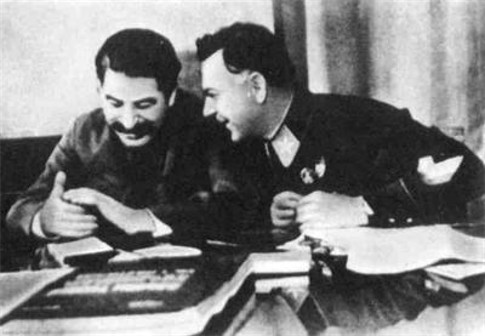 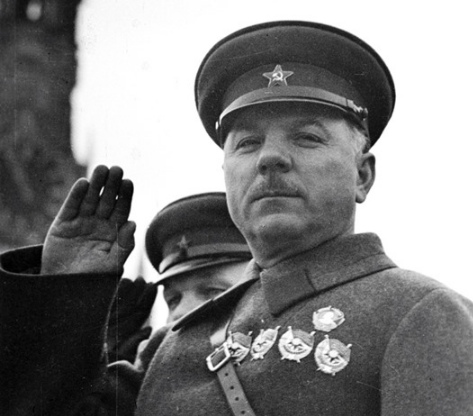 Voroshilov, Kliment [Ворошилов, Климент; Vorošilov], b 4 February 1881 in Verkhnie (now a part of Lysychansk), near Luhansk, Slovianoserbsk county, Katerynoslav gubernia, d 2 December 1969 in Moscow. Soviet Russian political and military leader. In 1918 he commanded detachments of Red Army partisans recruited from miners of the Donets Basin. In November 1918 he was appointed People's Commissar of Internal Affairs of the Provisional Workers' and Peasants' Government of Ukraine and commander of the Kharkiv Military District. In May 1919 he suppressed Nykyfor Hryhoriv’s anti-Bolshevik uprising. After the imposition of Soviet rule he was the USSR people's commissar of military and naval affairs (from 1925) and of defense (from 1934), as well as marshal of the Soviet Union (from 1935). In 1942–3 he co-ordinated Soviet partisan activity on German-occupied territories in Ukraine and Belarus (see Soviet partisans in Ukraine, 1941–5). He was a steadfast supporter of Joseph Stalin, a member of the Politburo of the CC CPSU (1926–60), vice-chairman of the Council of Ministers of the USSR (1946–53), and chairman of the Presidium of the Supreme Soviet of the USSR (1953–60). For his opposition to Nikita Khrushchev’s policies he was removed from his post in 1960, along with other leading Stalinists. He was rehabilitated under Leonid Brezhnev, and the city of Luhansk, which had been called Voroshylovhrad in 1935–58, was again renamed Voroshylovhrad in 1970 (reinstated as Luhansk in 1990).

List of related links from Encyclopedia of Ukraine pointing to Voroshilov, Kliment entry: