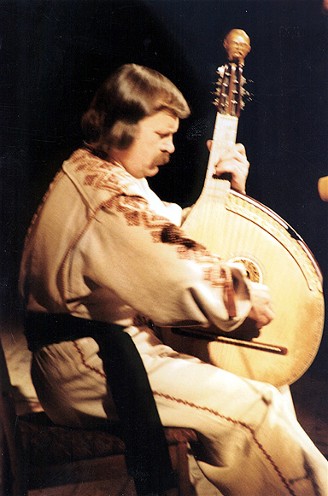 Bandurysts (bandurysty). Also known as kobzars, these were folk musicians who performed their songs and recitatives to the accompaniment of a bandura. In Ukraine the first mention made of them is in historical documents of the 16th century. Bandurysts or kobzars were wandering folk bards who originally composed and performed their own lyric-epic historical songs (see Duma) in the recitative style and later added songs of various other genres (religious and humorous songs, dance melodies) to their repertoires, which were passed on to their students. Bandurysts were held in high esteem by the Zaporozhian Cossacks, as well as by the general populace. Hetmans and members of the upper nobility often kept bandurysts at their courts.

In the 19th century the best-known banduryst was the blind Ostap Veresai (it should be noted that bandurysts were very often blind men); others who gained prominence were Mykhailo Kravchenko, Terentii Parkhomenko, F. Kholodny, Andrii Shut, I. Kravchenko-Kriukovsky, Tymofii Bilohradsky, and I. Kukharenko. During the 19th century the bandurysts, primarily those in the cities, were persecuted by the Russian government, and the art began to wane.

In the early 20th century bandura playing revived and was actively pursued on both an amateur and a professional level. Professional bandurysts, educated at music schools and conservatories, performed as concert soloists (Hnat Khotkevych, Vasyl Yemets, Hryhorii Kytasty, Volodymyr Kabachok). By the mid-20th century the individual art of the wandering folk bandurysts had disappeared completely, giving way to organized banduryst ensembles and kapellen. The first Ukrainian banduryst ensemble was organized in Kyiv in 1918. In the 1950s bandura playing was introduced into the curriculums of music schools, and banduryst kapellen were formed both independently and by oblast philharmonic orchestras. Bandurysts, as representatives and bearers of the Ukrainian folk tradition, were persecuted by the Soviet regime, as they had been in the tsarist period (they were prohibited from appearing in public places, etc). In the 1930s many renowned bandurysts were repressed and deported (V. Kabachok, H. Khotkevych, D. Balatsky, et al); some were even executed.

In past centuries the art of bandura playing was an exclusively male domain. In the 20th century women became involved as well (for example, women's banduryst trios became popular; a women's oblast banduryst kapelle was formed in Poltava). The more noteworthy contemporary ensembles include the State Banduryst Kapelle of Ukraine and the Ukrainian Bandurist Chorus of Detroit, USA. Contemporary composers such as Anatolii Kolomyiets, K. Miaskov, and Hryhorii Kytasty have provided new repertoire for the bandura.


List of related links from Encyclopedia of Ukraine pointing to Bandurysts entry: