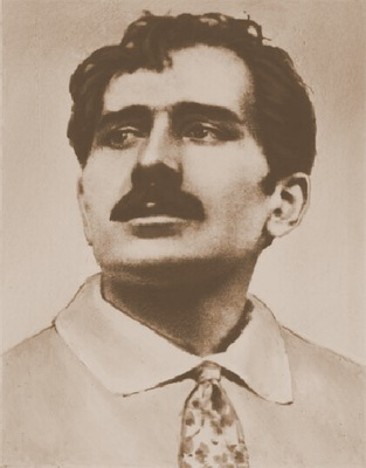 Krychevsky, Fedir [Кричевський, Федір; Kryčevs’kyj], b 22 May 1879 in Lebedyn, Kharkiv gubernia, d 30 July 1947 in Irpin, Kyiv oblast. Painter and pedagogue; brother of Vasyl H. Krychevsky. A graduate of the Moscow School of Painting, Sculpture, and Architecture (1901) and the Saint Petersburg Academy of Arts (1910), he traveled in Western Europe for a year and then settled in Kyiv, where he served as professor and director at the Kyiv Art School (1914–18). In 1917 he was one of the founders and director (1920–2) of the Ukrainian State Academy of Arts, at which he taught historical and genre painting and portraiture, and of which he served as rector (1918, 1920–2). When the academy was abolished, he was appointed professor at the Kyiv State Art Institute (1922–32, 1934–41) and the Kharkiv Art Institute. Fleeing west in 1943, he fell ill and was overtaken by advancing Soviet troops. After prolonged interrogation and torture he was released in a hopelessly weakened condition, and stripped of all his titles and honors. Twelve years after his death Krychevsky was ‘rehabilitated’: in 1959 the first posthumous retrospective exhibition of his works was held in Kyiv, and albums and monographs about his work began to be published.

Krychevsky was a prolific artist: he produced close to a thousand works (compositions, portraits, landscapes, sketches, and studies). He preferred large canvases and enjoyed grappling with the stylistic problems they presented. At one time he came close to the Neo-Byzantinism of Mykhailo Boichuk's school but, eventually, he turned to a more realist style based on patches of vivid color. His more important works are Three Ages (1913), Life: Triptych (Love, Family, and Return) (1925–7), which was highly praised at the 1928 Venice Biennale, Matchmakers (1928), Merry Milkmaids (1937), Dovbush (1932), Conquerors of Wrangel (1934), a cycle of temperas based on Taras Shevchenko's poem Kateryna (1937–40) (such as Dreamy Kateryna or Kateryna in Despair), and a series of portraits (of his mother, wife, son, Liudmyla Starytska-Cherniakhivska, Hryhorii Pavlutsky, and several self-portraits). For 30 years Krychevsky was one of the leading figures in Ukrainian art. He organized the first strictly Ukrainian art exhibitions in 1911 and 1913, and his work was exhibited, beginning in 1897, at over 34 individual and group shows in and outside Ukraine. He was also a successful teacher, whose students included Mykhailo Dmytrenko, Liudmyla Morozova, Tetiana Yablonska, Serhii Hryhoriev, and Heorhii Melikhov.

List of related links from Encyclopedia of Ukraine pointing to Krychevsky, Fedir entry: