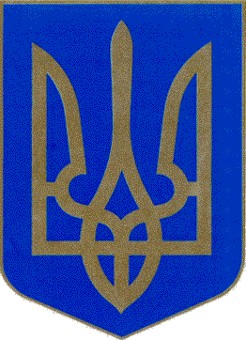 Trident (tryzub). The official coat of arms of Ukraine is a gold trident on an azure background (see Coat of arms of Ukraine of 1992). As a state emblem the trident dates back to Kyivan Rus’, when it was the coat of arms of the Riurykide dynasty. There are various theories about its origins and meaning. A trident was the symbol of Poseidon, the sea god of Greek mythology. It has been found in different societies, such as the Bosporan Kingdom and the Pontic Kingdom, the Greek colonies on the Black Sea (see Ancient states on the northern Black Sea coast), Byzantium, Scandinavia, and Sarmatia, and has been used in various ways: as a religious and military emblem, a heraldic symbol, a state emblem, a monogram, and simply a decorative ornament. The oldest examples of the trident discovered by archeologists on Ukrainian territory date back to the 1st century AD. At that time the trident probably served as a symbol of power in one of the tribes that later became part of the Ukrainian people. The trident was stamped on the gold and silver coins issued by Prince Volodymyr the Great (980–1015) (see Figure 1), who perhaps inherited the symbol from his ancestors (such as Sviatoslav I Ihorovych, see Figure 2) as a dynastic coat of arms and passed it on to his sons, Sviatopolk I (1015–19) and Yaroslav the Wise (1019–54) (see Figure 3). Iziaslav Yaroslavych (1054–78), Sviatopolk II Iziaslavych (1093–1113), and Lev Danylovych (1264–1301) used the bident as their coat of arms. Although the trident continued to be used by some ruling families as a dynastic coat of arms until the 15th century, it was replaced as a state emblem in the 12th century with Saint Michael the Archangel. The trident was also used as a religious symbol in Ukrainian folklore and church heraldry.

The trident appeared not only on coins but also on the bricks of the Church of the Tithes in Kyiv (986–96) (see Figure 4), the tiles of the Dormition Cathedral in Volodymyr-Volynskyi (1160), and the stones of other churches, castles, and palaces. It was also used as a decorative element on ceramics, weapons, rings, medallions, seals, and manuscripts. Because of its wide use in Kyivan Rus’ the trident evolved in many directions without losing its basic structure. Some of the variations include the bident, the trident with a cross on one of the arms or at the side, and the trident with a half-moon. Almost 200 medieval variations on the trident have been discovered.

At Mykhailo Hrushevsky's recommendation the trident of Prince Volodymyr the Great was adopted by the Little Rada (12 February 1918) and the Central Rada (22 March 1918) as the coat of arms of the Ukrainian National Republic (UNR) (see Coat of arms of the UNR). By that act the UNR leaders linked the modern Ukrainian state with the medieval state of Kyivan Rus’. The Great and Minor state emblems of the UNR were designed by Vasyl H. Krychevsky. The trident also appeared on the UNR bank notes, which were designed by Heorhii Narbut, O. Krasovsky, Vadym Modzalevsky, Krychevsky, and others. It was retained as the official coat of arms by the Hetman government and the Directory of the Ukrainian National Republic. The trident with a crossed middle arm was confirmed on 18 July 1918 as the emblem of the Black Sea Fleet. On 15 March 1939 the Diet of Carpatho-Ukraine adopted the trident with a cross as its official coat of arms. On 19 February 1992, after the restoration of Ukraine's independence in 1991, the Supreme Council of Ukraine accepted the trident as the chief element in the state coat of arms.

List of related links from Encyclopedia of Ukraine pointing to Trident entry: