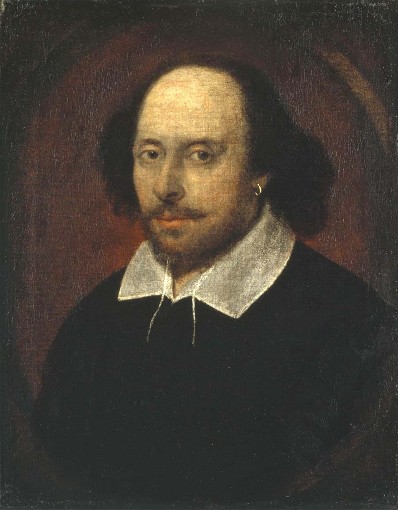 The first staging of a Shakespeare play in Ukraine was Les Kurbas's production of Macbeth by Kyidramte in 1920, in which Kurbas both directed the play and played the lead role. Othello was first staged in 1923 by the Ukrainska Besida Theater in Lviv under the direction of Oleksander Zaharov, who also played the title role. It was staged again in 1925–6 in Dnipropetrovsk, directed by Panas Saksahansky, with the lead role played by Borys Romanytsky. The Ukrainian premiere of Hamlet was staged in Lviv in 1943, directed by Yosyp Hirniak with Volodymyr Blavatsky in the title role. It was subsequently staged in 1956 in Kharkiv with Yaroslav Helias in the title role. Marian Krushelnytsky played the role of King Lear in a production of King Lear staged in Kyiv in 1959. Of all his plays Shakespeare's comedies Taming of the Shrew, The Merry Wives of Windsor, and Much Ado About Nothing have become most popular in Ukraine and are staged most often.

In addition to individual editions of Shakespeare's plays, the following collections of his selected works in Ukrainian translation have been published: Vybrani tvory (Selected Works, 2 vols, 1950, 1952), Tvory (Works, 3 vols, 1964, 1969), and the complete Tvory (Works, 6 vols, 1983–6). His sonnets were translated and published as a complete collection by Ihor Kostetsky in 1958 and by Dmytro Palamarchuk in 1964. The most notable Ukrainian studies of Shakespeare’s legacy were written by Ihor Kostetsky and include his German-language book Einige Fragen der Shakespeare-Übersetzung in slawische Sprachen (1964).


List of related links from Encyclopedia of Ukraine pointing to Shakespeare, William entry: