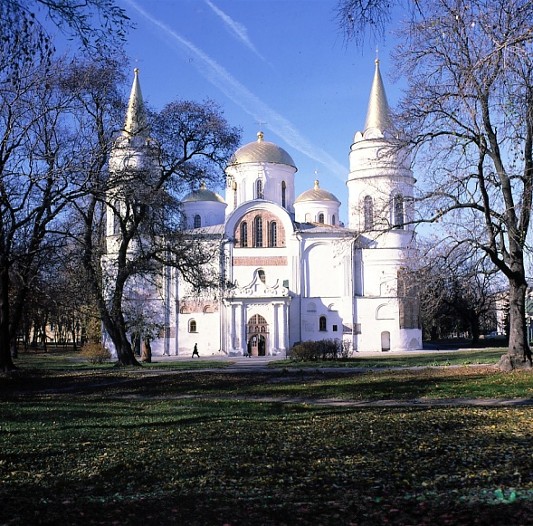 Chernihiv oblast [Чернігівська область; Černihivs'ka oblast']. Chernihiv oblast lies in the northern part of Left-Bank Ukraine. In the north the oblast borders on Belarus and the Russian Federation. For centuries the oblast’s territory was part of the geographical-historical Chernihiv region. Chernihiv oblast was established on 15 October 1932, one of seven large administrative units within the Ukrainian Soviet Socialist Republic. By 1940 it relinquished its eastern part to a newly-formed Sumy oblast, but retained 31,900 sq km. With a population (2018) of 1,020,100 (of which 65 percent is urban), the oblast has an average population density of 32 persons per square kilometer, the lowest among the oblasts of Ukraine. The oblast’s capital is Chernihiv. The oblast has 22 raions, 16 cities, 29 towns (smt), and 1,465 villages.

Physical geography. Most of Chernihiv oblast lies within the Dnipro Lowland. It is a somewhat swampy plain, sloping from the northeast (200–220 m above sea level) to the southwest (100–150 m above sea level). The climate here is moderate-continental: mean July temperatures range from 18.0̊ to 19.5̊C, and mean January temperatures from –6̊ to –8̊C. Average annual precipitation increases from 550 mm in the south to 580 mm in the northeast. The length of the growing season is 190–200 days. The Dnipro River and its left-bank tributary, the Sozh River, flow south along the western boundary of Chernihiv oblast. The main river of the oblast is the Desna River, which flows from the northeast to the southwest. The left-bank tributaries of the Desna River are the Seim River, Doch River, and Oster River; its right-bank tributaries are the Ubid River, Mena River, Snov River, and Bilous River. In the southeast of Chernihiv oblast, the Udai River meanders south into the Poltava oblast to flow into the Sula River and then the Dnipro. There are mainly podzol sandy soils in the northern, Polisian part and chernozems in the remaining southeastern third. Mixed forests of pine, oak, birch, hornbeam, aspen, alder, and poplar predominate in the northern part, while small oak forests characterize the southeastern, forest-steppe third of the oblast. Forests cover 20.2 percent of the oblast’s territory.

History. In the 10th century the territory of Chernihiv oblast formed the nucleus of the Chernihiv principality. During 11th-13th centuries that principality was one of the largest and mightiest political entities of Kyivan Rus’. In 1239 it was captured by the Tatars, in 1356 annexed by the Grand Duchy of Lithuania, and in 1503 it came under the control of Muscovy. In 1648 the territory of Chernihiv oblast became part of the Cossack Hetman state. Under the Russian Empire it became part of Kyiv gubernia (1708) and then formed Chernihiv gubernia (1801). After Ukraine’s struggle for independence (1917–21), the area was subdivided in the 1920s into smaller administrative units of the Ukrainian Soviet Socialist Republic, called okruhy, and then re-assembled into the larger Chernihiv oblast in 1932.

In 2017 the oblast had 19 vocational-technical schools with 5,100 students and 16 postsecondary institutions with 20,100 students, including the Chernihiv National University of Technology and the Nizhyn State University.

Economy. Chernihiv oblast is one of many industrial-agrarian regions of Ukraine. Agriculture remains important in the oblast’s economy. It is varied and intensive, with an emphasis on grain, potatoes, meat, and dairy products. Between the two sectors, industrial production accounted for 66.4 percent of the oblast’s gross output in 1970 declining, with economic slowdown, to 59 percent in 1991. After 1991, with the transition to a market economy, state enterprises restructured, private firms and various services gained importance. By 2017, to the gross regional product of the oblast, industry contributed 21 percent, trade 10 percent, agriculture 31 percent, financial services 8 percent, transport and communications 4 percent.

Industry. Forestry with woodworking and farming with food processing were traditional. New industrial enterprises were added in the postwar years: fuel extraction (55 percent of Ukraine’s petroleum at its peak in 1970 and some natural gas), petrochemicals, synthetic fibers, equipment and machine building. In 1970 light industry accounted for 44.5 percent of industrial production by value, the food industry for 24.5 percent, the machine-building and metalworking industry for 9.4 percent, the chemical industry for 8.4 percent, the fuel industry for 5.3 percent, and the woodworking industry and paper industry for 3.2 percent. By 2017, the industrial profile of the oblast changed. Unable to compete internationally, light industry dropped to less than 11 percent and machine building to 5.7 percent, whereas food processing gained relative importance, rising to 54.7 percent, energy supply to 15.4 percent, and woodworking and paper production to 8.6 percent. Energy for the industry was derived in the 1970s from local peat deposits (the Zamhlai peat-brick plant), oil fields (at Hnidyntsi [see Hnidyntsi Petroleum and Gas Field], Pryluky, Leliaky, and Monastyryshche), natural-gas fields (Bohdanivka and Milky), the Chernihiv Thermoelectric Station, the Kyivenerho power system, and coal from the Donets Basin.

Of the light industry, the most developed branches in 1970 were the textile industry, knitwear industry, garment, flax-and-hemp-manufacturing, and leather industry. One of the largest textile plants in Ukraine—the Chernihiv Woolen Fabrics Manufacturing Complex—and a woolworking plant are still operating in Chernihiv. There were textile mills in Novhorod-Siverskyi and Oster; garment factories in Chernihiv, Pryluky, and Nizhyn; a leather-goods factory, hosiery factory, and knitting and spinning mills in Pryluky; and a felt factory in Chernihiv. Eight flaxworking plants, two hempworking plants, and several shoe factories were in Chernihiv, Pryluky, and Semenivka. The oblast remains famous for its handicraft industries: kilim weaving and artistic embroidery.

In the food industry sugar refining, distilling, meat packing, butter and cheese making, flour milling, and canning industry are highly developed. Sugar refineries are located in Bobrovytsia, Nosivka, Parafiivka, Lynovytsia, and Novyi Bykiv. The Chernihiv Union Distilleries are found in the Borzna, Koriukivka, Horodnia, and Kozelets raions. Chernihiv and Nizhyn have breweries. Starch factories are in Semenivka, Petrivka, Nekhaivka and Peliukhivka. There are meat-packing plants in Chernihiv, Nizhyn, Pryluky, Bakhmach, and Novhorod-Siverskyi. Butter and cheese factories are located in Ichnia and Bakhmach. In Nizhyn there is a large canning factory and an oil-and-fat rendering plant.

The chemical industry has gained importance in the oblast’s economy. In Chernihiv there is a large synthetic-fibers plant called Khimvolokno, (which started production in 1959); in Pryluky there is a synthetic-resins plant and polyethylene pipe-making; and in Nizhyn there is a lacquer and paint factory. The machine building and metalworking industry serve for the most part the needs of agriculture and the chemical industry. Agricultural machinery is built in Nizhyn and Pryluky; firefighting equipment and construction machinery are manufactured in Pryluky. Railway car repair works are located at the oblast’s principal rail junction in Bakhmach. In Chernihiv, a former Soviet-era supplier of auto parts and assembler for the Gorky Auto Works, the Chernihiv Auto Factory (ChAZ) has expanded to assemble several models of buses and a trolley bus. Electronic and optical medical instruments are designed and manufactured in Nizhyn. In the woodworking industry and paper industry there are six furniture factories, the Chernihiv Musical Instruments Factory (now defunct), and an industrial paper and carton plant in Koriukivka. The building-materials industry produces reinforced-concrete structures, roofing materials, brick, etc.

Transportation. Railways, roads, rivers and pipelines form the oblast’s transport network. The length of effective railroads is 877 km (2009), down from 892 km (1976–90). The oblast is crossed by the Kyiv–Nizhyn–Konotop–Moscow electrified trunk line, the Homel–Bakhmach line, the Kyiv–Nizhyn–Chernihiv–Homel–Saint Petersburg line, the Chernihiv–Nizhyn–Pryluky line, the Chernihiv–Slavutych–Prypiat–Ovruch–Korosten line, and the Novhorod-Siverskyi–Novozybkov–Homel line. The main railway junctions are Bakhmach, Nizhyn, Chernihiv and Pryluky. There are 7,700 km of highway, of which 7,200 km are hard surface (2009). The network grew from 7,500 km of highway, of which 3,600 km were hard surfaced in 1976, to accommodate increased trucking and automobile traffic. The international highways Kyiv–Chernihiv–Homel–Saint Petersburg and Kyiv–Nizhyn–Moscow cut across the oblast. There is boat transportation on the Dnipro River, Desna River, and Sazh River, and on parts of the Snov River and Seim River. Chernihiv’s port on the Desna River was important for handling building materials; now its use is limited to river excursions. Chernihiv is served by an airport. The Dashava–Kyiv–Moscow gas pipeline runs through the oblast. A crude oil pipeline conveys the Pryluky oil some 200 km south to a refinery at Kremenchuk.

Tourism. Many tourists are attracted to Chernihiv oblast to see its historic places, notably in the cities of Chernihiv, Nizhyn, and Novhorod-Siverskyi. Historic sites of national significance include Baturyn and Kruty. Natural attractions include the Kyiv Reservoir, the banks of the Desna River, the Ichnia National Nature Park (established in 2004, 9,700 ha) and its affiliate, the historic Trostianets Dendrological Park. Tourists in Chernihiv oblast peaked in 2006 with a total of 37,800 visitors, of whom 3,800 were from abroad, staying at 49 hotels.

List of related links from Encyclopedia of Ukraine pointing to Chernihiv oblast entry: